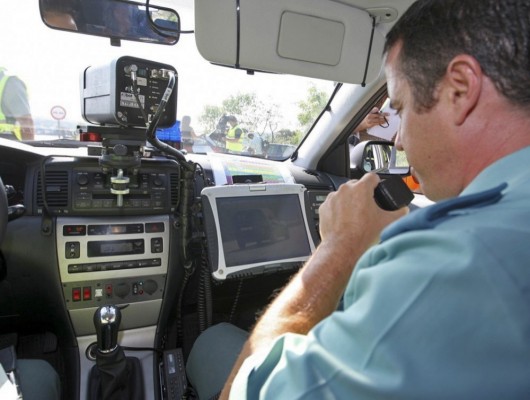 This article is about how traffic radars works. If you want to see more, please take a look at this article.

Traffic radar units send out a wide radar beam that’s similar to an invisible spotlight. The radar beam widens as it travels, and measures several hundred feet wide at a distance of one-half mile. So a traffic radar unit simultaneously “sees” virtually all cars in sight. The radar beam hits oncoming cars, and is reflected back to the radar unit, which can calculate speeds from those reflections. Radar can be used from a police car that’s either stationary or moving, since it does not require precise aiming to clock traffic speeds. There are also handheld units that can be operated from a car, motorcycle, or an officer standing at the side of the road.

How far away can radar clock you

Radar range depends on the size and shape of the vehicle. Radar can track a large truck from over one mile away, even too far to be seen by eye. But some sports cars bounce back such a weak signal that they must be within 500 feet to be clocked.

Although traffic radar receives reflected signals from all cars within range, it has no way to display all the different speeds, and no way to even decide which car is traveling which speed. In fact, traffic radar displays only a single number, usually the speed of the strongest reflected signal. If all vehicles were identical, the strongest reflection would be from the closest car. But different vehicles reflect different amounts of the radar signal.

Because of this inherent flaw of traffic radar, an officer could be looking at your car while his radar unit is actually clocking the speed of a large truck far down the road—perhaps even out of sight. And since his radar doesn’t tell him which vehicle it is reading, the police officer might mistakenly think that you are responsible for the speed displayed. And give a ticket to you instead of the truck driver. More than a dozen technical errors for traffic radar have also been documented, but mistaken identity (technically called a “target identification error”) is by far the most common and tickets can be given anywhere, for any reason, at any time.