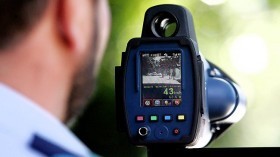 This article is about how laser guns (Lidars) work. If you want to find out more continue reading!

The police officer chooses the vehicle he wants to measure in the laser guns viewfinder. Then he presses the trigger and the laser sends impulses in the invisible-infrared part of the spectrum against this vehicle. The beam is emitted in very short intervals - pulses. If we aim the laser beam at a shiny object, it will be reflected back from it - Instantaneously. The reflected beam is captured by optics and a light-sensitive element - a photodiode - converts it into an electrical signal.

Based on the length of the pulse return time, the lidar calculates the distance to the object. The ratio of the distance traveled to the elapsed time is calculated from the average of several measurements, and the radar calculates the speed based on these values. The measuring point is most often the headlight, mask, or registration plate, which tends to be very shiny. By pressing the trigger, the device is activated and the vehicle's speed is measured within about one to two seconds. The speed data will immediately appear on the display.

A portable radar detector can detect laser guns, however, it usually does not provide enough time for safe deceleration, more about how radar detectors can be found here. The only 100% protection against laser speed measurement is a laser jammer.